Description of the Chaikin Oscillator

In its essence, SNO is a version of the Accumulation/Distribution (A/D) indicator, which was also developed by Chaikin. The A/D shows by the closing price relative to the extremums for a certain period, how much the buyers or sellers prevail on the market. The Chaikin's oscillator is the difference of moving averages on the A/D indicator: slow and fast sliding.

At graphic Chaikin's oscillator is a broken line located under the main chart, whose shifts up and down are evaluated on a scale with negative and positive values relative to the zero level. Simplified, this oscillator shows the acceleration of the volume dynamics forex tradingwhich can indicate the imminent changes in the price dynamics. The volume in the oscillator formula makes it more sensitive than indicators of similar orientation.

At forex market with the help of the Chaikin Oscillator it is possible to create a trading system, but it is necessary to use tick data, which differs from real volumes. The Chaikin Oscillator is also connected to two other indicators created by its author - the Chaikin's Money Flow and Accumulation/Distribution. Mark Chaikin's developments are often called "hybrid" as they successfully combine elements and functions of other indicators.

Log in to your broker's terminal, add the Chaikin oscillator to the chart and see what comes out

On the MT5 trading platform the Chaikin's oscillator is in the list of preinstalled instruments, to find it, go to the "Insert" tab, then to the "Indicators" section, then to "Custom" and find CHO in the drop-down menu (Image 2). 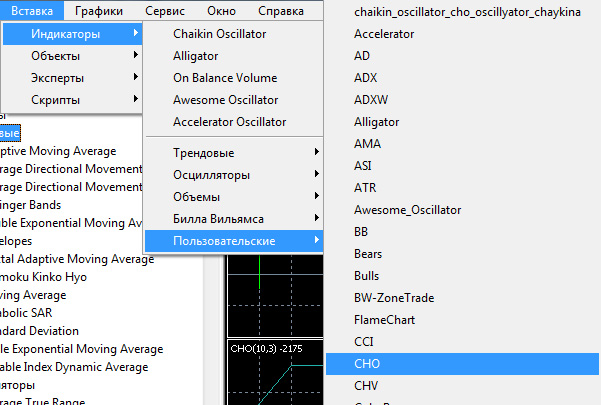 In the settings window of the oscillator basic parameters are set - the fast MA - 3, the slow MA - 10, it is not recommended to change them, at least until the trader feels confident in the market. You can also change the MA calculation method in the settings - select a simple one (SMA) or exponential (EMA).

The oscillator for MT4 can be downloaded for free from the MT4 and MT5 library of source codes, e.g. from https://www.mql5.com/ru/code/7761. First, you download the zip file, put it in the MQL4 folder and from there it is loaded directly into the terminal. You can also download forex robot for MT5 (Image 3), for example, at the link https://www.mql5.com/ru/code/24830. In particular, this advisor works on signals from the 90-day moving average, MA.

First you download the zip file, move it to the MQL4 directory in the "Experts" folder, then use the "File" tab of the terminal to open the directory and confirm the data merge. For the advisor to be able to run, the terminal must be restarted.

After the terminal is overloaded, you need to go to the tab "Tools" - "Settings", where you need to enable automatic trading and import DLL. Activation of automatic trading is done through the corresponding tab "Auto-trading". The Seagull Oscillator is "dragged" to the chart and the corresponding navigation section. It is possible to make your own settings in the Expert Advisor.

Second, it is assumed that the accumulation period is accompanied by volume growth, but if the market is rising and volumes are falling, we can soon expect the market to slow down. During the distribution period, when the price decreases, volumes fall slightly, but after a certain time of market deceleration, panic leads to a sharp increase in volumes. Accumulation or distribution is stronger the greater the distance from the average price to the closing price.

A bearish divergence appears when the price continues to set new highs. At the same time, the indicator curve no longer updates highs. A bearish divergence indicates that the uptrend is ending, but the oscillator signals require confirmation by additional indicators before entering the trade. Correspondingly, a bullish divergence is marked when the price reaches the lows and the indicator does not reach the lows. This means that the downtrend is ending, but again, we must wait for confirmation of this assumption before entering the trade.

There is a well-known recommendation that the author of the oscillator advises to follow when trading with it: signals in a medium-term trend are preferable to signals in the opposite direction. This is also true when the oscillator confirms a new maximum or minimum in the opposite direction. Only a signal in the direction of the trend can be considered as a reason to buy or sell, a signal against the trend can be supposedly disregarded.

Trading strategies based on the Chaikin Oscillator

Chaikin's oscillator is considered by many traders to be so informative that it can be used in trading without any additional indicators. It has many advantages, among which the most important is the ability to give anticipating signals, which is difficult to overestimate for determining the best entry points into the market, besides the fact that the oscillator does not overdraw indicators.

Nevertheless, it is preferable to use the Chaikin's oscillator with other indicators, as the Chaikin's oscillator has some disadvantages, which you should also be aware of. For example, moving averages are short here, it leads to the appearance of false signals, though their quantity can be reduced if you increase the period in the settings, but then the signals of the oscillator can lag behind.

The oscillator can show sharp jumps in data and often crosses the zero line, so it is difficult to interpret its signals correctly. It can also lag behind at sharp price changes. In particular, the Chaikin's oscillator is effectively combined with Bollinger Bands, RSI, Stochastic, CCI and other similar tools.

The oscillator without additional indicators is quite successfully used on five-minute charts for high-frequency strategies, where the rules technical analysis more applicable, fundamental factors do not have time to influence the price. The simplest trading strategy using the Chaikin's oscillator is to conclude transactions by the position of the oscillator - if it is above zero, it indicates an uptrend, if it is below zero, it indicates a downtrend. But this strategy is designed for trading on rather long timeframes.

One of the strategies implies the use of the adaptive moving AMA together with the Chaikin's oscillator (Image 4). This tool is pre-installed in the trading platforms. The AMA action is based on displaying the averaging of the asset value over a certain period of time. The tool is effective in analyzing the chart of the asset value.

In MT5, the AMA indicator is in the list of trend tools as Moving Average, it is also in the list of Williams indicators, but you need exactly Adaptive Moving Average - adaptive moving average. If the AMA is supposed to be used for trading on timeframes up to H1, there is no need to change the settings. On other timeframes it will not be superfluous to test how reliably the indicator displays signals.

Although, at first glance, it seems to be a simple strategy that can be used even by beginners, but for a stable and effective implementation it requires a certain amount of experience in trading (forex trading training). The difficulty arises when setting indicators on timeframes from 1H and when interpreting the AMA signals and their confirmation by the Chaikin oscillator. The pluses of the strategy include the fact that the signals do not redraw.

The strategy, in which the trader monitors the overbought or oversold condition, implies that it is necessary to determine by horizontal lines the range in which the oscillator line is overwhelmingly. When the indicator shows a touch of one of these two lines, it may be worth opening a trade, given that the price is likely to return within a limited range.

The strategy is also actively used with the classic Moving Average indicator. The essence is to open transactions when the Chaikin's oscillator crosses the average value for a certain time, this is what the MA is for.

The Chaikin Oscillator is a universal hybrid indicator which can be used effectively in the forex market. It has a high sensitivity and can be used as a leading indicator. At the same time, Chaikin's Oscillator can give false signals. Therefore, it is recommended to use it together with other indicators.

revieweek.com is a large informational service of company reviews that everyone has heard of and not only. Post complaints, reviews, and company reviews. It's invaluable!
14282
Sitemap