The main cryptocurrency - Bitcoin - despite the fluctuations in 2019 has demonstrated its resilience, proving that it can perform the functions of a protective asset and an asset that preserves value (bitcoin digest). After starting the year at about $3,700, it rose briefly to nearly $13,000 and stabilized at about $7,300. (Figure 1).

There were no fundamental reasons for critical fluctuations in bitcoin prices, or they lost their power and bitcoinomics has learned to cope with them, stopping after significant jumps at a price above the one at which the rally began, but not at an inflated price. Some altcoins showed stronger fluctuations, but they did not affect the market as a whole. The positive thing is that the number of cryptocurrency users is constantly expanding, if at the beginning of 2018 there were about 18 million, now there are about 40 million. The more users, the more stable the cryptocurrency is. Since the issue of cryptocurrencies is limited, the growth in the number of users increases capitalization.

So even though cryptocurrencies are still unstable, there is a long-term positive trend. The plus side is also that new cryptocurrency users are more qualified. Those who entered the market accidentally left during the period of sharp fluctuations in cryptocurrencies. The remaining users will not allow cryptocurrencies to fall below a certain level. The main problem of the cryptocurrency market, which was brightly highlighted in 2019, is the lack of large institutional investors. Even worse, there was a noticeable outflow of them.

During the year, 68 cryptocurrency funds, which worked in the interests of large investors in the crypto market, were closed, and this can by no means be called a positive phenomenon. But such a number of closed funds cannot be called critical, there are about 800 of them working in the market. At the same time, there were events in the crypto market, which show that the interest of cryptoinvestors still has not fallen to zero, on the contrary, there are certain prospects here.

In particular, Bakkt, the trading platform of the operator of the New York Stock Exchange ICE has launched the trading of bitcoin futures and opened a custodial service just for institutional investors (cryptocurrency exchanges). Fidelity Digital Asset Services, the cryptocurrency division of Fidelity Digital, has secured permission to launch a cryptocurrency trading platform for large investors in New York. Thus, the institutionalization of the crypto market continues, albeit more slowly than crypto-enthusiasts would like. Although many large companies are launching corporate crypto funds and trading platforms, the market is dominated by retail investors, which adds to the market's volatility.

But it is not volatility that stops institutional investors, because cryptocurrencies themselves remain an attractive investment. Investors compensate for the risk by changing the direction of their investments. Previously, investors invested directly in cryptocurrencies and ICOs, counting on a surge in asset prices. But now large crypto investors prefer to invest in blockchain technology. Major funds like Polychain Capital, BlockTower, Arca Funds prefer to invest in such venture funds.

Institutional investors are acting more cautiously after the overly sharp fluctuations in cryptocurrency prices in late 2017 and the prolonged correction of 2018. For a relatively long time, bitcoin's price fluctuated between $3,000 and $4,000, which would have been the best time to enter, but large investors missed it, fearing a return of excessive price spikes. On the other hand, in the future, long periods of stable development of the crypto market may be evaluated positively by constitutional investors.

But to an even greater extent, institutional investors are stopped by uncertainty in the regulation of the crypto market amid the sharp rejection by U.S. authorities of the cryptocurrency projects Libra from Facebook and TON from Telegram. Contributing to the cautious assessment of prospects is the fact that there are no exchange platforms on the market that have the same reputation as stock market. Mass entry into the crypto market is also hindered by the difficulty of analyzing the prospects of the crypto market. Almost no one can predict the movement of cryptocurrency prices. This forces investors to minimize risks as much as possible, investing very cautiously in very few blockchain projects, and when it comes to cryptocurrencies, only in the top ten coins, led by bitcoin.

Cryptocurrencies themselves and blockchain technology in general are no longer considered something that can "turn the world upside down. Attitudes toward cryptotechnology are going through a natural process of cooling down, getting rid of inflated expectations, and this is more of a good thing than a bad thing. The appeal of the cryptocurrency market is borne out by the fact that cryptocurrency hedge funds, even though many of them have shut down, remain the fastest-growing segment of the hedge fund industry. You can trade cryptocurrencies from Forex brokersFor example, there are many digital assets at RoboForex (site).

The vast majority of analysts suggest that the cryptocurrency market will be quieter in 2020, but will develop progressively. However, there is a threat of continued investor outflows if the crypto market does not move from fluctuations around $7,000 to a pronounced positive trend. But, on the other hand, there will be investors in the market, which will establish themselves as major players. Overall, the crypto market is shaping up to be a standard structure for most industries, with a smaller number of players owning the vast majority of assets. Several events that are expected or are already happening are encouraging for cryptocurrency market participants.

First of all, it is halfing in the bitcoin network, reducing the reward to miners by half, which will take place in the spring of next year. Then the reward will be 6.25 BTC. This is a fundamental factor affecting the value of bitcoin. How exactly it will affect, no one can predict exactly, but previously the halving of the reward increased the rate of the coin, and then the rate decreased while maintaining a positive trend in general. In 2020, the Lightning Network system, which speeds up and makes transactions cheaper, is expected to continue to evolve. This could help push bitcoin into the real economy and broaden its audience.

Another bitcoin destabilizing factor will disappear from the crypto market, the PlusToken crypto pyramid. Bitcoin crypto pyramids undermine the reputation of cryptosystems and can still affect the value of the coin. The fall decline in bitcoin prices is believed to be due to the sale of bitcoins by members of the PlusToken fraud scheme. Chinese builders of this pyramid consolidated bitcoins totaling $3 billion and have been getting rid of them since August. The fraudsters' influence may not have been decisive, but it could have been a strong secondary influence on price dynamics. The good news is that the price drop didn't turn into a collapse. And with this pyramid gone, there will be one less unnecessary influencing factor.

Another factor that could affect the cryptocurrency market positively is Facebook's cryptocurrency project Libra. The project was planned to launch in 2019, but the implementation was suspended by the U.S. government. In the first half of 2020, Facebook intends to continue discussions with the regulator on the details of the cryptocurrency launch. Facebook, given its audience of billions, already at the start has a huge opportunity to give momentum to the entire cryptocurrency economy. The project is so large-scale that it can affect both the "regular" economy and the financial structure of the world, as well as politics. The caution of U.S. authorities is understandable. But we can hardly doubt that the Libra project will be implemented one way or another.

Many are hoping for Ethereum (Figure 2), which activates smart contracts and expands the reach of the coin, forming mass support for ethereum. But the main hope is the introduction of the Proof of Stake algorithm, which allows the coin network to be used as a way of passive income while the coins are inside the cryptocurrency wallet and not actually used in any way. This could increase interest in cryptocurrencies in general. There are also updates to the Ethereum network scheduled for 2020, which could make the network faster and more accurate. All this may not affect the price of cryptocurrency immediately, but it creates a positive groundwork for the future.

The Ripple cryptocurrency system (Figure 3) continued to integrate into the banking infrastructure in 2019. American Express and China's Lian Lian Group are slated for 2020 to improve the efficiency of bank card payments. Ripple is one of the few coins that participate in the real economy, so any achievement of this coin has a positive impact on the cryptocurrency market as a whole. 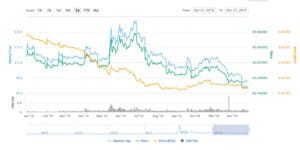 China has always been a significant influence on the crypto market. In 2020, crypto-yuan, a cryptocurrency of state development, will be tested. There are plans to launch the coin in a number of cities, and as a real payment instrument for ordinary residents. How the success or failure of this event may be affected is hard to say. But it is likely that if the cryptocurrency experience is positive, it could raise the status of cryptocurrencies, increase investor interest, and contribute to a positive trend in the crypto market.

On the other hand, the main feature of cryptojuan is that it is regulated. And it is impossible to predict how the market will accept it. We can assume that if the project is successful, then China's know-how will be implemented by authorities in other countries, which will completely overturn the cryptocurrency market, because the lack of control by authorities is a fundamental factor of cryptocurrencies, which largely ensures their attractiveness.

The capitalization of the cryptocurrency market now reaches $200 billion, with bitcoin providing about half of that figure. You may get the impression that this is a pretty large amount of capitalization, but objectively, it is still less than 1% of the world stock market. The volume of the global stock market exceeds $82 trillion. That is, the cryptocurrency market remains very small, because it is still at the very beginning of its development and its prospects are not yet completely clear. But there is one factor that can bring cryptocurrencies to a completely different level of development. This is fiat money, whose problem in today's world is that its management - its value and issuance - depends on central banks and central governments. The pricing of fiat money is not quite clear right now.

A recently published study by Deutsche Bank confirms that fiat money is not becoming the foundation of the stability of the world's financial system, but is increasing its risks. In a commentary on the study, Deutsche Bank spokesman Jim Reid argues that the fiat financial system could begin to disintegrate in the next ten years due to fundamental problems. Of course, these risks are realized by financial institutions, but we know that they do not always react to challenges in time and tend to prolong problems. That is why the world lives from crisis to crisis, and each crisis increases skepticism about fiat money. This could be the key factor in global acceptance of cryptocurrencies and various kinds of alternative money in general.

Cryptocurrencies, especially bitcoin, have shown that they are as resilient as many fiat currencies. Assuming that the world experiences another financial crisis, but a very powerful one - and this has long been predicted by many experts (if not all) - bitcoin's audience could grow by thousands of times. Bitcoin is hard to use as regular money, but it can be a "safe haven," an asset that preserves and multiplies the value of regular money and allows you to survive crises at a profit. This could be a strong factor in the growth of its price and global acceptance.