ICO project United Traders - is an interesting yet very worthy and complete ecosystem, clearly demonstrating the possibilities of ICOs and cryptocurrencies in the functioning of a holistic financial model.

The United Traders ICO is not only one of the first of its kind among brokers, but also perhaps one of the most promising and winning projects among the proposed ICOs (Wikipedia). This is largely eloquently demonstrated by the fact that the decision to enter the ICO by the company caused a storm of emotions among the public and investors, a large number of Internet users immediately began to register in the project even before the campaign itself was launched. Thus, during the presale (preliminary stage) half of the tokens were sold. 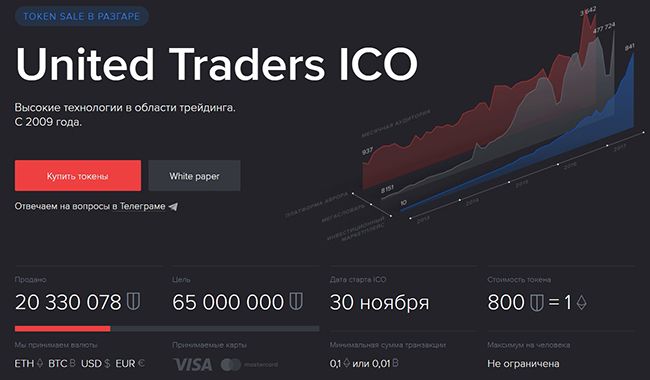 In many ways, such a huge interest in the ICO United Traders was influenced not only by the real possibility of solving the problems that hinder the positive development of the cryptocurrency market today (the issue of liquidity, for example) and its obvious promise, but also by the serious composition of the project team, the transparency of the project (thanks to which around the clock users can see on the project website information on the progress of work, study the description of ecosystem modules and, of course, become an investor). What is this project and why does it attract a large number of investors? Let's find out in a detailed overview of the United Traders ICO.

United Traders (broker review) has been actively working in the field of financial markets since 2009, being an authoritative and one of the most dynamically developing companies, actively using modern trends. From the very first year of work the company demonstrates excellent results and high rates of return, being a recognized expert on trading in the world stock markets.

It all started with the creation of trading algorithms that won the prestigious award in 2011 Moscow Exchange (for participation in the "Best Private Investor" contest). This is how the broker became widely known. Then algorithmic fund Kvadrat Black was opened, the company continued its dynamic development, based on unique technologies, today successfully provides services to traders in forty-two countries of the world.

Developments stockbroker (financial dictionary, Aurora trading platform, Magazine (official website) for full-fledged communication of traders, Kvadrat Black fund, etc.) allowed to create a large ecosystem of United Traders - a large-scale complete concept of ico project, which creates around the trader an integral professional environment with maximum opportunities for full-fledged work. The company chooses the principle of tokenization of the service area as the basis of the ecosystem, as well as the opportunity to remove any barriers from the investment market (currency, national, legal).

The success story of United Traders is largely due to the fact that the organization pays great attention to the development of new innovative products for comfortable and functional trading. It is important for the company to provide the user with favorable trading conditions, training opportunities, and communication between traders. Rapid development of the industry cryptocurrency trading and new prospects prompted the company to create its own products for ICOs and cryptocurrencies, about this we will tell in more detail in our material.

ICO project broker United Traders is one of the most successful examples of the integration of blockchain technology (Wikipedia) and cryptocurrency trading into the world of investment funds and large investments.

The company offers today one of the most promising ico projects, which can solve several problems that exist in the field of cryptocurrency trading (cryptocurrency - is it a scam? find out here), by introducing a set of products to the market. The tools offered by the team are already necessary for the cryptocurrency's future development, so we can safely consider the project doomed to success in advance.

In addition, the modules stockbroker - These are not launch pads, but already operating solutions with working prototypes. Some products have been developed, while others are currently at the testing stage. All of this already allows us to attract large cash investments from investors. You can read more about the project in the Whitepaper, available on the site succinctly and detailed version.

The project concept boils down to a skilful combination of platforms that will be able to connect investor funds with global investment products, innovative ideas and solutions based on blockchain capabilities and cryptocurrency implementation. Then, after the ICO, a token (UTToken) will be introduced into all of the company's projects as a full-fledged internal currency. What are the advantages and features of UTToken? It will become a universal and popular means of payment in the United Traders ecosystem: it has liquidity, it can be converted into any currency, carry out any transactions within the project, its price is determined by the community itself: 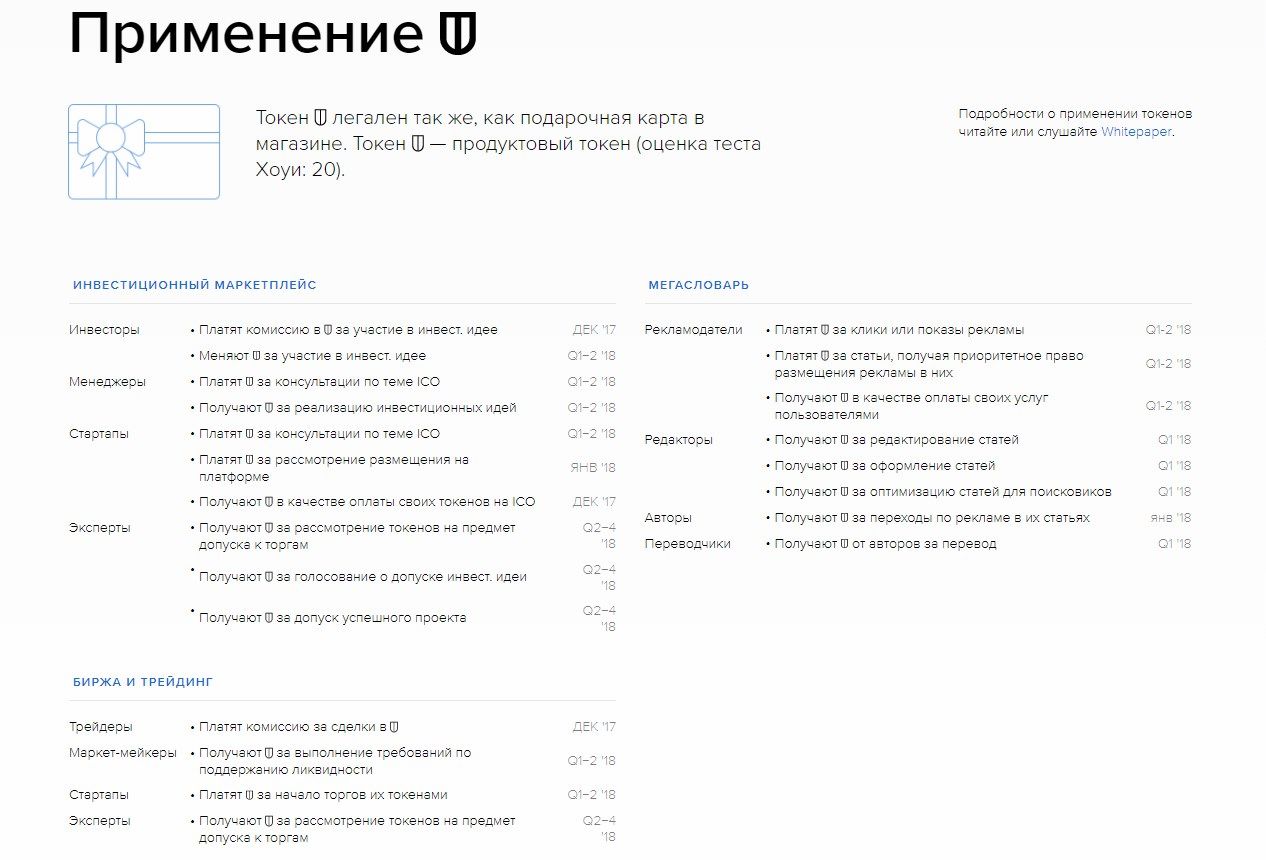 The money after the sale of tokens is planned to be sold on projects:

Part of the plans ico United Traders have already been implemented. Today they are available to investors in the project:

The project team includes professionals and experts in financial market trading, they have been working in the organization since 2009, actively implementing complex projects and personal developments. These include legendary public figures Anatoly Radchenko, Roman Vishnevsky, Dmitry Belousov. A serious team is a serious trust factor, which also satisfies the demands of investors and guarantees the prospects of the project. 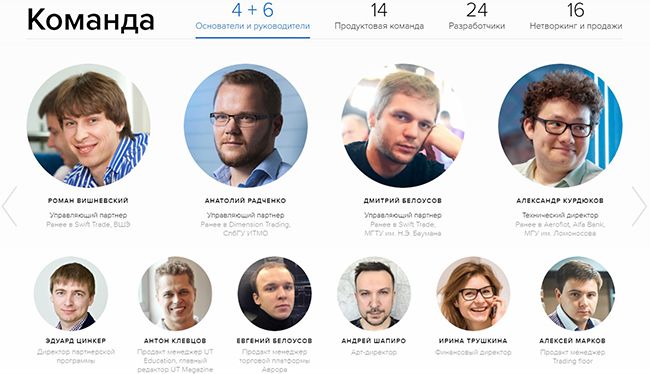 What are the advantages of participating in the United Traders ICO project?

How do I participate in the United Traders ICO project?

To do this you must register on the official website of the broker on the project page. Registration takes three minutes (after registration you can explore the platform products, prototypes of all modules offered).

To register in the project you must specify a valid contact information, because you will need to confirm the phone or e-mail address by entering a special code in the field:

Immediately after registration, you can buy ico tokens by clicking the "Buy Tokens" button: 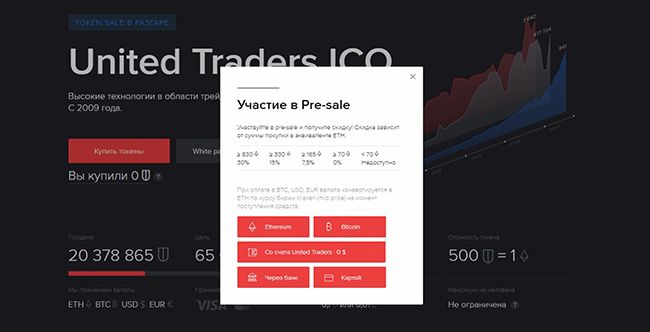 Choose a convenient way to pay: from a broker's account, through a bank, by card, or with Bitcoin (official website) and Ethereum (site). If you purchase tokens in fiat currency, your funds will be automatically converted at the exchange rate of Kraken Exchange (site): 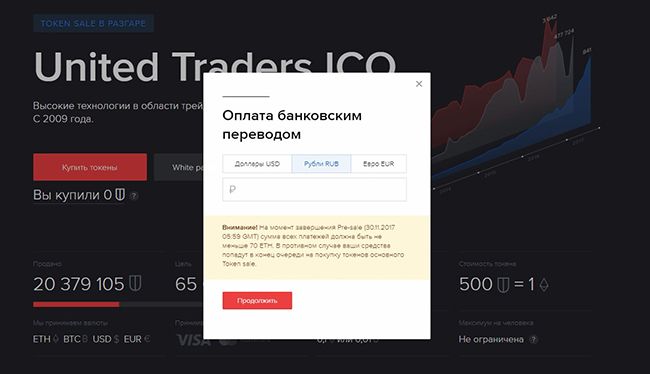 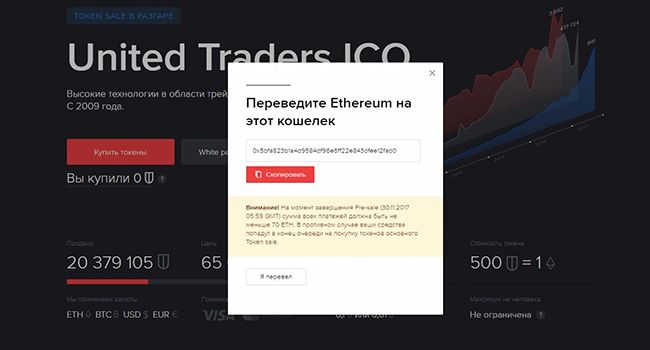 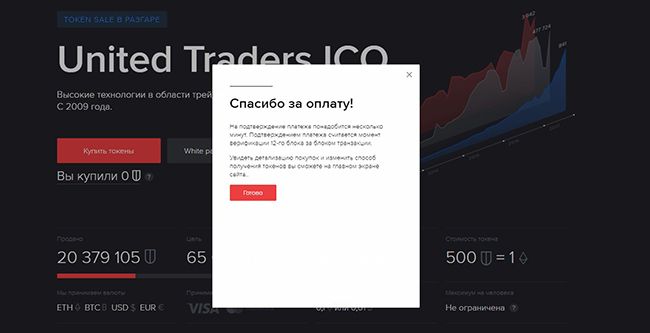 Once you have decided on a payment method for the tokens, transfer the funds. The tokens will be available to you after the ICO. On the homepage of the project you will see information about how many tokens you have purchased: 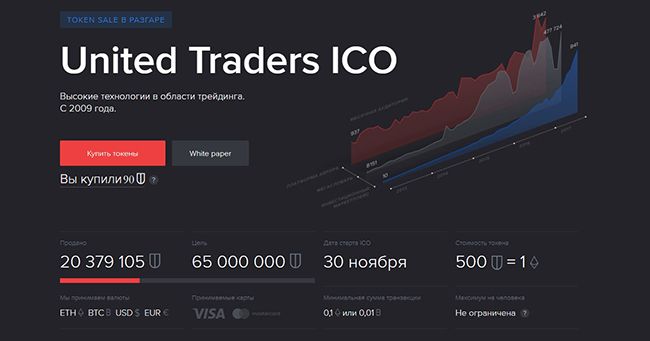 The company plans to sell 100 million tokens: 65 million will be sold during the presale and main stage of the ICO.
Tokens that are unsold will be destroyed.
The minimum purchase amount is 70 ETH.
The cost of tokens is set at 500 UT=1 ETN.
Bitcoins, ether, U.S. dollars, and euros are available for payment (in addition, tokens can be purchased by bank transfer, with a card).
If tokens are purchased in fiat (i.e. real money), the money will be automatically converted at the exchange rate of Kraken.
The project will be based on the Ethereum blockchain, using the UT token (ERC20 standard).
All services of United Traders broker are available after registration on the project websiteThe user can also work with demo versions of the modules.

revieweek.com is a large informational service of company reviews that everyone has heard of and not only. Post complaints, reviews, and company reviews. It's invaluable!
6545
Sitemap